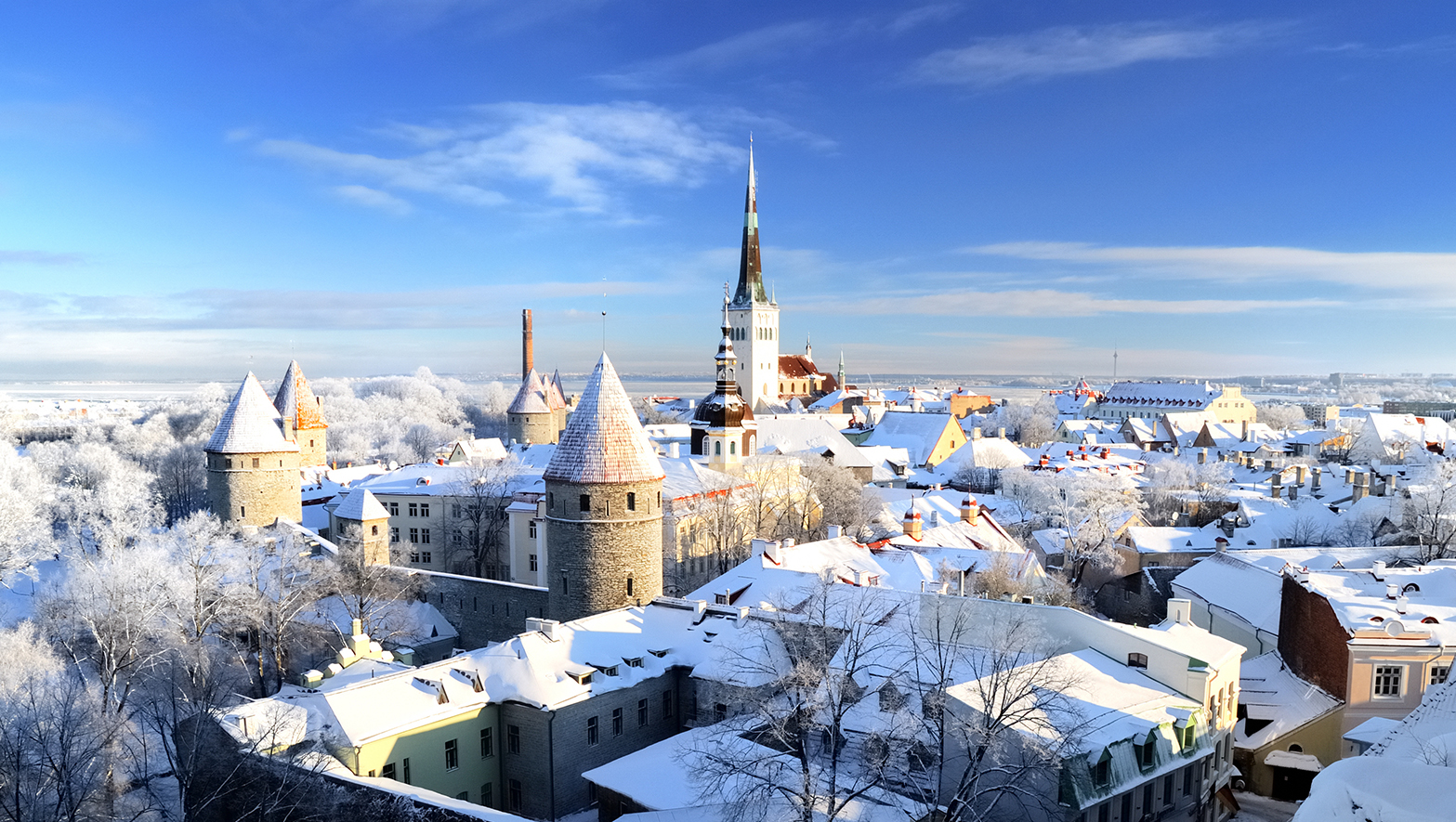 We have just returned from a 4 day trip to Estonia where we were delighted to work with the Corelli Baroque Orchestra in two performances based around three Magnificats by Vivaldi, Charpentier and Bach. What follows is a look back on a great trip!

We rose from our Christmas slumber on 27th at 3.30am to travel to London Stansted for our 6.45am flight to Tallinn. Even at this time of the day and so close to Christmas, Stansted was packed and we didn’t have too much time for the usual browse through duty free! The flight was around 3 hours and we landed in Tallinn at midday Estonian time (2 hours ahead). It was quite a small airport and were met by the organisers who took us in a mini-bus to our hotel in the old town of Tallinn. We noticed the cold weather straight away and I was certainly glad for bringing my new hat which I’d got for Christmas!

After a brief rest in our hotel and a quick lunch we headed to the Estonian Academy of Music where we would be rehearsing in the afternoon. We walked through the old town of Tallinn and saw for the first time how beautiful the city was – more sightseeing later though! We met our Estonian colleagues for the first time in one of the large practice rooms in the academy. It was a really great set up and it seemed to be a place full of music making. We began with rehearsals of the Charpentier Magnificat featuring just three singers (Mark Williams, Nils Greenhow and John Holland Avery) and a smaller group of players. The orchestra was mainly made up from players from the Estonian National Orchestra performing on period instruments but they were also joined by some baroque musicians from nearby Finland and some historical performance students from the Estonian academy. With Helsinki being only 20 minutes by plane or 2 hours on the ferry there is regular collaborations between musicians from both Finland and Estonia. We gradually added to our forces first working through the solos in Bach’s Magnificat before being joined by Trumpets and Timpani to work on the wonderful choruses from the work. It was exciting (as a Trumpeter!) to see that all the Trumpet players were playing on Frank Tomes instruments. We concluded rehearsals with Vivaldi’s Magnificat. Like the Charpentier, this is a new piece to me for this project and it has grown on me throughout. The fiery 4th and 5th movements – Fecit Potentiam and Deposuit Potentes are particular highlights. I was fairly exhausted by the end of rehearsals after a long day of travel too we all welcomed some Estonian beer in one of the many traditional ‘baars’ in the old town. We also headed to the main square to see the impressive Christmas tree! 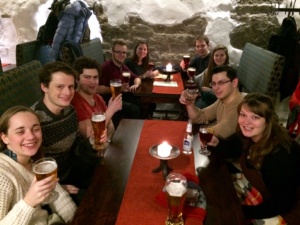 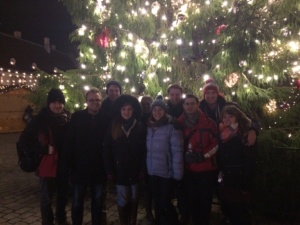 On 28th we didn’t have anything in the schedule until 1.45 when we needed to head off for our first concert. We spent the morning exploring Tallinn further and visiting some of the many interesting sites in the old town. A particular highlight for me was the Alexander Nevsky orthodox cathedral. With it being in a typically Russian style it was amazing to see the ornate detail inside and out. It was great to return to the main square in the day and visit the christmas market there. Nils Greenhow discovered some excellent smoked cheese there (imagine a big cheese string!) and I invested in a Russian doll and a model of one of the old town houses. We saw quite a few Russian dolls with Trump and Putin faces instead of the traditional look…! 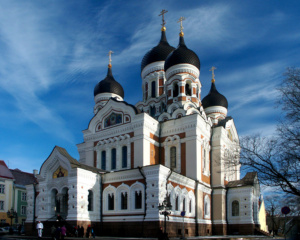 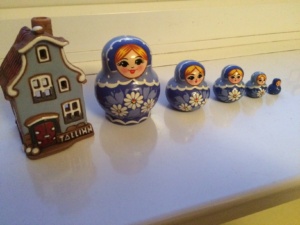 We then returned to our hotel to meet our coach to head to Tartu for our first performance. We were then joined by the orchestra and set off on the 2.5 hour journey. It was quite a journey and after leaving Tallinn the scenery was very picturesque and it was nice to see some snow at Christmas time though I think the Estonians didn’t share our excitement with the odd snow ball being thrown when we arrived in Tartu! Despite Amber Rutterford reading up on Estonian wildlife (Bears, Wolves, Elk and Beavers) we didn’t see anything! Still the views and sunset were lovely. 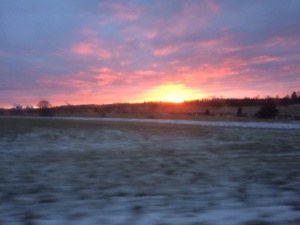 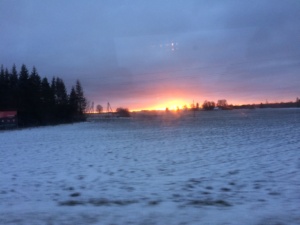 I think we were all surprised at how dark it got so early on in the day and by the time we arrived in Tartu at 4.30pm it was very dark. We had time to grab a quick coffee before a short rehearsal in the church. We had been warned that it would be very cold in the church but were pleasantly surprised with it being lovely and warm! We didn’t get to see much of Tartu which is the second city in Estonia. It is renowned for it’s University – we saw one of the main buildings lit up in impressive Christmas lights but that was about it. However the church in which we were performing was a fantastic space. The church was bombed a great deal in both World Wars and fell into disrepair but has since undergone a remarkable renovation which merges both old and new styles. There was plenty of room for changing and the organisers insisted on me having my own dressing room (what a perk!) The concert went very well and we had around 250 in the audience. The audience loved it and we returned to the stage to perform the final movement of the Bach Magnificat. I always find it interesting how audiences from different countries react to concerts. It’s almost as if each country has it’s own concert etiquette book! I like it though, it always means you can never be sure what will happen next!

It seems that concerts in Estonia particularly in churches do not have an interval so we began with the Vivaldi followed by the Charpentier before concluding with the biggest of the three pieces, Bach Magnificat. It was quite a quick turn around and we jumped on the bus back to Tallinn though it was quite a late return to our hotel where the kind staff helped us to organise some great takeaway pizza,well deserved after another long day! 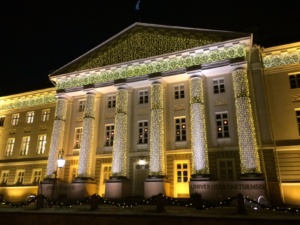 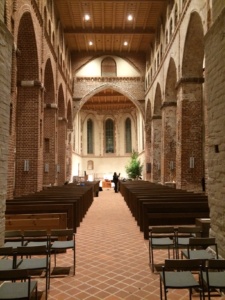 We began Thursday morning with another relaxing look around Tallinn and all had some great food in the Peppersack restaurant, highly recommended! We then made our way to St John’s Church where we would be performing our second concert. The church was situated in Freedom square, the place where many national events are celebrated and also where a gigantic glass cross commemorates the Estonian War of Independence. The church was impressive both inside and out with its striking yellow exterior. We had a short rehearsal touching on some areas of the music. It was an excellent space to perform in, the first concert had been quite a squeeze for us all to fit into the performance space but here it was a good set up which really helped. 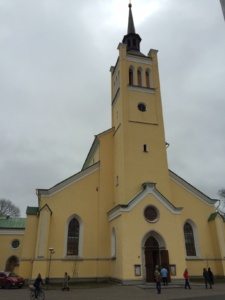 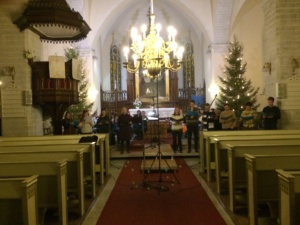 This performance was broadcast live on Estonian National Radio on the classical music station. It was a really fantastic experience and the first broadcast we have done as an ensemble. The singers sang wonderfully accompanied by some great playing by the orchestra. It’s always such a pleasure to stand in front of brilliant musicians and friends who pulled off a great performance. You can listen to the performance on catch up here. We were again applauded loudly by the 350 in the audience and repeated the final movement of the Bach as an encore. We were delighted that the British Ambassador to Estonia, Theresa Bubbear attended the concert and you can see her tweet below! 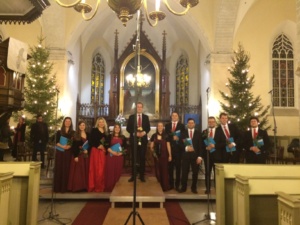 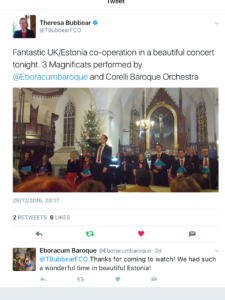 Some members of the orchestra took us all to a pub after the concert where we unwinded with some of the local tipple particularly some of the now infamous, Vana Tallinn. With a few sore heads the following morning we headed to the airport for our flight home. It has been a brilliant experience to visit Estonia. It is a beautiful country with friendly people and a thriving music scene. Tallinn is a place I cannot recommend highly enough to visit. It’s old town is full of character and lots of interesting places to drink and eat too. This trip was a highlight of our year and a fantastic opportunity to perform in a live radio broadcast for the very first time. I’d like to thank all the organisers in Estonia for making the trip run so smoothly and to all the musicians involved in making it such a wonderful musical experience!