The Story Orchestra: Four Seasons in One Day

We were absolutely delighted to return to York from 21st – 23rd March to film at the National Centre for Early Music.

We were due to give a week of workshops across schools in East Riding back in 2020 but with COVID the was delayed until this year. We’re incredibly grateful for the support of the NCEM and the East Riding Music Hub for making this project a reality and being able to film it to share with so many schools.

We live-streamed our performance to 37 schools across the UK from Yorkshire to Dorset. You can watch the performance until May on the NCEM website here.

The performance features the beautiful illustrations by Jess Courtney-Tickle alongside the wonderful music of Vivaldi’s Four Seasons in the version for Recorder (which Vivaldi knew!) The project is narrated by Vivaldi himself and in this case we were very excited to add a 2.5m apple tree prop for Vivaldi to narrate under.

Alongside the performance we filmed videos about our baroque instruments and have created a bank of resources for schools to delve further including music actives and art workshops.

We also filmed a number of animal themed pieces including movements from Biber’s Sonata Representativa for release later this year.

It felt very special to be back in York though we missed being able to go to all the usual places we like to visit. Education workshops are such a key part of what we do so being able to get into schools digitally in these challenging times means a lot to us. This would have been impossible without the NCEM and East Riding Music Hub, thank you! My thanks also to the wonderful musicians: Miriam Monaghan, Miri Nohl and Seb Gillot. 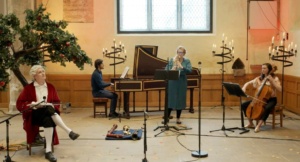