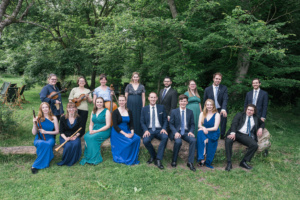 Since the summer of 2020 we have had the privilege of performing at the idyllic Orchard Tea Garden in Grantchester. We’re delighted to be returning to perform there again this summer from Thursday 9th June to Saturday 11th June with a varied programme of music across the three nights.

We’ll kick start our run of concerts with a performance of Bach’s Coffee Cantata alongside some lovely instrumental works that you might have heard at one of Bach’s coffee concerts in Cafe Zimmermann in Leipzig. It’ll include pieces by Telemann, Bach and Vivaldi. Bach’s Coffee Cantata, is a comedic piece depicting the rise of the coffee house in 18th-century Germany and addictions to coffee at this time. It follows the story of the frustrated Herr Schlendrian (Jamie Woollard) and his daughter, Lieschen (Elen Lloyd Roberts) who is addicted to coffee! He attempts to stop her coffee drinking but she remains defiant and sings of her love of caffeine. This is the closest Bach came to writing an opera and it is presented in a comedic form.

Our second performance ‘Baroque Classics’ does exactly what it says on the tin. There will be famous arias sung by soprano, Elen Lloyd Roberts and Tenor, Gareth Edmunds alongside instrumental works by the greats of the 18th century but look out for a few hidden gems along the way…

Our final evening features a concert performance of Henry Purcell’s semi-opera, King Arthur. This patriotic opera is packed full of great tunes from battle cries and trumpets tunes through to the shivering ‘Cold Song’ and the iconic ‘Fairest Isle’ We’ll perform this with just 9 singers acting as both the chorus and soloists alongside a string band with oboes, recorders and trumpet. Narrator TBA.

All the tickets for these performances will appear online soon. Each concert will cost £25.50 or you can buy a ticket for all three for £67.50. We’d love to see you there and please to spread the word- it’s a lovely way to enjoy great music in a beautiful setting!